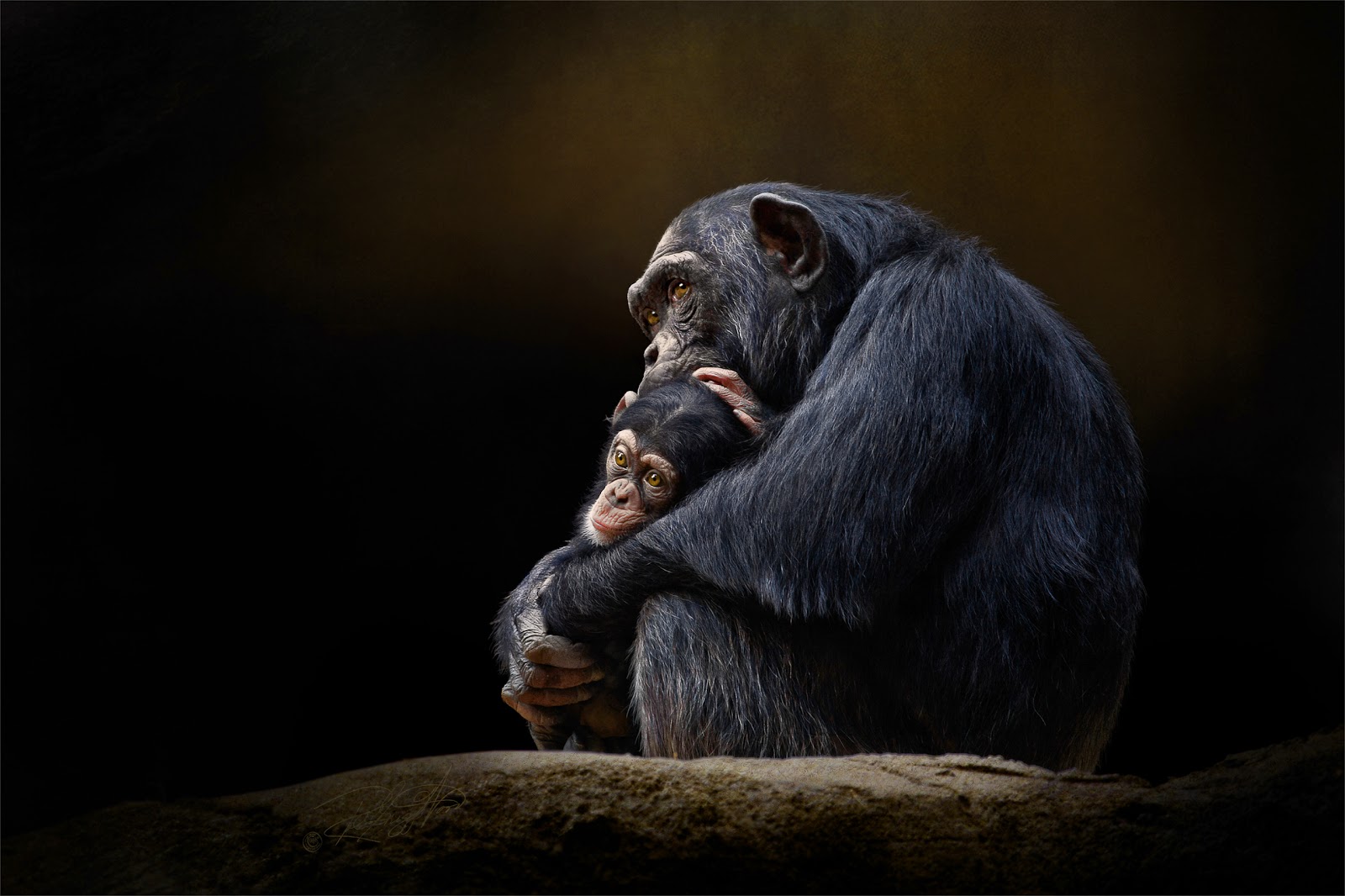 NOT MY IMAGE!! Go read the amazing things +Robin Griggs Wood wrote about these precious creatures!!

A State of Gracie: Happy at Last

Over a year and a half ago, visitors at the L.A. Zoo were shocked to witness the mauling of Gracie's new baby by an angry male chimp. This event caused even greater sadness because it was the first baby born to the zoo in over thirteen years. Since that time, Gracie has given birth to a new, more protected, baby. I was fortunate to have caught them in a contented moment (inspired in my processing by +Alan Shapiro and his exquisite primate images.)

In fact, there are three new babies now at the zoo; all well, happy and cavorting about during my visit a month ago. The mothers will nurse their babies for up to 5 years and a chimpanzee does not reach adulthood until the age of 13.

"The Los Angeles Zoo is home to one of the largest chimpanzee troops of any zoo in the country. Built in 1998, the Zoo's Chimpanzees of the Mahale Mountains habitat has been hailed by renowned primatologist Jane Goodall as one of the country’s finest chimpanzee habitats. Maintaining a healthy, diverse zoo population of chimpanzees is crucial to the survival of the species. Unfortunately, chimpanzees are currently on the endangered species list. Populations have decreased because of foresting, hunting, commercial exportation, and collection for scientific research. Although chimpanzees are protected in 34 national parks and reserves, laws can be difficult to enforce in remote regions." (source: lazoo.org)

"Millions of chimpanzees used to live throughout equatorial Africa from southern Senegal through Central Africa to western Tanzania. Today, there are estimated to be merely 170,000-300,000 chimpanzees left in Africa, and their population is decreasing rapidly. One recent census in the Ivory Coast revealed that the chimp population there had decreased 90% in just the past twenty years." (source: savethechimps.org)

We share over 98% of our DNA with chimpanzees, which makes them our closest living relatives in the animal kingdom. Chimps have 32 teeth and the same standard body temperature as humans, 98.6º. We share similar senses of sight, hearing and taste, as well as facial expressions that reveal analogous emotions of anger, joy, grief, boredom and the faculty to comfort each other with kisses and hugs.

For the above reason, I am very glad that six months ago, "the U.S. Fish and Wildlife Service proposed adding captive chimpanzees to the endangered species list, which would severely limit how the animals could be used in medical research. Although wild chimpanzees were added to the list in 1990, captive chimpanzees were not given the same protection. Adding captive chimpanzees would mean protecting another 1,884 animals in the U.S., including many currently being used in medical research. If the animals are added to the endangered species list, laboratories will have to obtain a special permit from the U.S. Fish and Wildlife Service to use the animals for any testing that could "harm or harass" the animal." (source: abcnews.go.com)

While species endangerment has been a natural occurrence throughout history, I am grateful that humans are willing to take some responsibility for human-initiated endangerment. As I, for one, want my children's children to have the opportunity to encounter these remarkable creatures.